Why You Should Consider Mediating Your Divorce 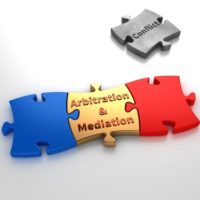 You may have heard about mediation as an alternative to going to court. Mediation is the process of negotiating a dispute privately using the services of an attorney, and while it can be used to reach a resolution of many types of disagreements, mediation is particularly useful in the field of divorce law. Alabama family law attorneys who are trained in mediation can facilitate a fair, compassionate, and knowledgeable negotiation between you and your spouse with less stress and expense than a courtroom divorce. Read on to learn why you should consider mediation for your divorce in Alabama.

Avoid the stress and animosity of court

Since mediation is private, it is a highly customizable process. Some divorce mediations are conducted with each spouse in a separate room, with the mediator acting as the bridge between the parties and expressing each spouse’s desires to the other. This process is especially valuable for couples who have difficulty communicating without arguing. Mediators can also work with both spouses together and try to defuse conflict should it flare up. The mediator has an interest in reaching a resolution as peaceably as possible and making each spouse feel that they have control over the process. The mediator will make an effort to ensure that both parties feel that their needs and requests are heard and incorporated into a final resolution. Often, judges’ rulings are one-sided, so that one party feels like they’ve won and the other feels like they’ve lost. Mediators want both spouses in a divorce to leave satisfied, feeling that they received a fair result.

Some children may have been watching their parents fight for several months or years. When parents decide to continue the battle and conduct their divorce in a courtroom, children can be exposed to a long and contentious fight for months or even years longer. A mediation can resolve your divorce in a matter of days, and do so in a way that allows you to avoid the stress of a trial, thus making you a happier and more relaxed parent to your kids. Of course, both you and your spouse must be willing to trust the process and commit to resolving the divorce through mediation.

Separating your life from your spouse’s is an expensive process, sometimes requiring that you make major expenditures on a new home or car, and additional costs in alimony and child support. Mediation involves far less expense in court costs and attorneys’ fees. While you may decide to hire an attorney to represent you in mediation, attorneys’ fees will be much lower since the process is so much faster and requires less time in drafting briefs and motions. Rather than spend your money on a court fight, you can spend it on rebuilding your life.

By Lana Hawkins | Posted on June 28, 2016
Skip footer and go back to main navigation