Who Gets the Dog in an Alabama Divorce? 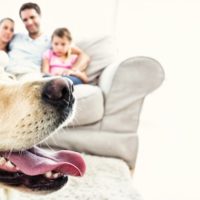 Divorces are always difficult and often involve contentious fights over specific assets. One common dispute that arises: What happens to the family pet? Illinois recently passed a law that treats pets more like children in a divorce, following on the heels of a similar law in Alaska. Courts in Illinois will now consider the best interest of the animal in determining pet allocation, rather than just treating the pet as property. But in other states like Alabama where there are no clear laws on pet distribution in divorce, how will a court decide to whom the family dog goes? Continue reading for answers about dog custody in an Alamba divorce, and contact a seasoned divorce lawyer with any questions about a possible or pending divorce.

Pet parents may feel like pets are part of the family, but there is no guarantee that a divorce court will think the same way. Alabama, like most states, treats pets as simply another form of personal property. Unlike with children, then, courts will not make custody agreements regarding family pets. Like other property, if the pet was owned by one spouse before the marriage, the pet will be treated as separate property and not part of the divorce. If the couple acquired the pet during the marriage, then it is marital property and subject to distribution in the divorce proceedings.

Parties are free to make voluntary arrangements for pets in a divorce. Even if a court would not create a “pet custody” arrangement, the parties to a divorce are free to incorporate such an agreement into the ultimate marital property agreement. This can include provisions for partial time with each spouse, for example. If included in the final agreement, the custody arrangement will have the same force of law as the rest of the property distribution according to the rules of contract.

Assuming the parties cannot agree on the distribution of pets, courts will consider a variety of factors in determining to whom the pet goes. If you want to keep your dog, it helps if you can show the court that you had more of a personal attachment than your spouse, and that you are the animal’s primary caregiver. Photos of time spent with the animal, testimony of neighbors proving that you walked it and cared for it, or proof that you fielded appointments with the vet are all helpful in determining pet allocation.

Courts will also consider child custody arrangements in determining where to distribute pets. Often, courts will decide that pets should go with the children, either to a single primary caregiver’s house or back-and-forth as part of a joint custody arrangement. Additionally, like with child custody determinations, courts will consider financial evidence to determine who is able to afford caring for the animals following the divorce.

If you or your spouse has filed or is considering filing for divorce in northeastern Alabama, contact the compassionate and skilled Guntersville family law attorneys at the The Hawkins Law Firm at 256-502-4444.

By Lana Hawkins | Posted on November 16, 2018
Skip footer and go back to main navigation