What to Know Before a “Gray Divorce” 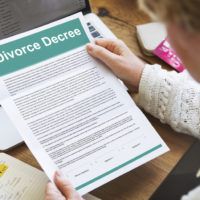 Across the US population as a whole, divorce rates have long been on the decline–that is, with the exception of those over 50. One survey found that about one in four people going through a divorce is over 50, and roughly one in 10 is over 64. As people live longer, and as taboos against divorce become less pervasive, divorce has become more acceptable to older adults. That said, those over 50 still have special considerations to make when it comes to divorce.

1. Don’t underestimate the impact that a divorce will have on your family

You might assume that, by getting a divorce after your children are out of the house, your split won’t have as much of an impact on your kids, but this isn’t necessarily true. Your children have only known a life where their parents were together, so a later-in-life separation can be very painful. Understand that your children may mourn the loss of the home they’ve known, and try to be sympathetic as they learn how to navigate a relationship between you and your ex.

2. You may need to reconsider your retirement plan

Divorce in your later years can have a substantial impact on your ability to retire. Since your retirement accounts and savings will likely be divided between two households, you may need to spend more time in the workforce than you had originally planned to rebuild your savings. You may wish to speak with a financial planner to determine how long you’ll need to keep working, and if there are ways you can reduce your expenses to make retirement affordable sooner.

3. Think about your cash needs immediately after your split

Establishing a separate household from the one you shared with your ex can be costly. Plan for the need for large amounts of cash soon after a divorce. For example, if your share of the division of assets largely consists of retirement account assets, you’ll be forced to pay a tax penalty each time you withdraw funds from that account.

4. Be careful about which assets you seek in a property division

If you’ve lived in the same home for 15 or even 30 years, you may be reluctant to pick up and move after your split. Remember that maintaining a house (especially an older home) can be arduous and costly, and you’ll be doing it on your own. You may be better served by selling the house and dividing the value between yourself and your ex, rather than getting stuck with a home you ultimately can’t afford in a few years.

By Lana Hawkins | Posted on April 21, 2017
Skip footer and go back to main navigation