What is a Mandatory Settlement Conference (MSC)? 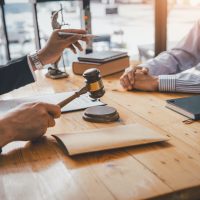 It may be surprising to hear, but judges don’t like trials. They prefer parties to settle their matters outside of court and will do everything in their power to encourage settlement. Trials are meant to be a last resort when the parties simply cannot come to an agreement. Alabama courts can, for example, order the parties to attend mandatory mediation, often at the outset of divorce litigation. Additionally, Alabama family courts may order the parties to attend a mandatory settlement conference before starting a trial in a divorce case. Read on to learn about mandatory settlement conferences from our seasoned Alabama divorce attorney.

What’s the Purpose of a Mandatory Settlement Conference?

The function of the mandatory settlement conference (MSC) is to encourage the parties to a divorce, custody battle, or other family court proceeding to reach a settlement and end the litigation. The goal is for the parties to revisit and review whatever issues remain outstanding in the litigation and, if possible, come to an agreement.

The conference will be a more formal, structured negotiation as compared to the informal settlement talks that occur throughout the litigation. The parties will present information regarding the outstanding issues and present their respective sides of the matter. The court will then facilitate discussion between the parties on specific topics in an effort to promote negotiation and eventual settlement.

The court’s aim is to narrow down the issues in the case as much as possible until there’s nothing left to dispute at trial. A very small number of cases make it all the way to trial, in part because the system so heavily encourages settlement. It behooves the parties to do their best to reach a settlement on all issues and avoid the added time, cost, and emotional energy that a trial requires.

When Does an MSC Happen?

According to the Alabama Rules of Civil Procedure, a court can order the parties to attend a conference at any time before trial for one of several reasons, including to facilitate settlement. Typically, mandatory settlement conferences are held toward the end of litigation, shortly before trial, in one last push to settle the case.

Notably, the Alabama Rules of Civil Procedure permit parties to request a settlement conference if no other pretrial conference has already been scheduled. The Rules provide that the court should hold such a conference so long as there is sufficient notice for the conference to be held at least 21 days before the trial date.