What Can We Include in an Alabama Prenuptial Agreement? 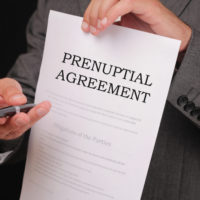 As people get married later in life, often after building their careers or purchasing property, couples are less likely to see prenuptial agreements as stigmatized and more likely to see them as a practical way to avoid a messy divorce in the future. Prenuptial agreements can be a civil way to agree in advance on issues that could otherwise result in prolonged and costly litigation, and can even include provisions making them obsolete should the couple remain married for a certain number of years. Read on to learn about the types of provisions that can be included in an Alabama prenuptial agreement, and contact a Guntersville family law attorney with any additional questions.

How certain property will be treated

Normally, property or assets that spouses acquire prior to a marriage will be considered separate, i.e. the property of only the purchasing spouse. Property acquired once the couple is married will typcially be considered marital property, to be divided equitably between the spouses during a divorce. In a prenuptial agreement, spouses can agree that certain property should be treated as marital or separate, even if it wouldn’t be otherwise. Additionally, the prenuptial agreement can decide in advance which spouse will get to keep large marital assets in the event of a divorce, such as the family home or rental property, or state that each spouse will be permitted to retain their own retirement accounts upon divorce.

Whether a spouse will receive alimony

One of the most common provisions in a prenuptial agreement is an agreement regarding alimony, or spousal support, payments in the event of a divorce. While some agreements rule out either spouse receiving spousal support, others establish differing amounts of alimony payments depending on how long the couple is married prior to divorce.

Which spouse will pay which debts

Couples can choose to allocate debts accrued during the marriage between the spouses. For instance, spouses might be assigned certain credit card or medical debts in the prenup.

If you’re in need of skilled and professional legal help with the creation of an Alabama prenuptial agreement, contact the Guntersville family law attorneys at The Hawkins Law Firm for a consultation, at 256-502-4444.

By Lana Hawkins | Posted on November 28, 2017
Skip footer and go back to main navigation