The New Tax Law And Estate Tax Considerations in Alabama 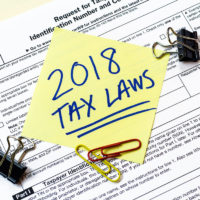 In December 2017 President Trump signed into law the Tax Cuts and Jobs Act (the 2017 Act). The new tax law goes into effect this year and may significantly affect estate planning for high net-worth individuals.

Under federal law, the estates of decedents who leave behind property may owe an estate and gift tax. The tax only applies to the extent that the aggregate value of the estate exceeds a threshold value, known as the estate tax exemption. Married couples can take advantage of a higher joint exemption. The 2017 Act, effective this year, doubles the previous exemption amount. For individuals, the Act raises the exemption from around $5.5 million to $11.2 million in 2018. For married couples, the exemption is raised from $11 million to $22.4 million. The amount is adjusted for inflation and will thus increase every year it is in effect. The law is set to “sunset” after 2025, at which point the amount will revert to the pre-2018 rate, though still indexed for inflation after 2011.

Alabama has no effective estate or inheritance tax

Alabama, like many other states, has an estate tax based on the earlier federal estate tax regime. Until 2005 the federal government provided credits against federal tax owed for state estate or inheritance tax paid; states had “pick-up” taxes that taxed citizens only as much as would be credited against federal tax, so their citizens would not double-pay. Since 2005, state estate tax is a deduction, rather than a credit, for federal tax purposes. Some states issued revised estate taxes, or kept estate tax regimes that were not technically based on the federal tax, leaving citizens in those states potentially on the hook for state and federal estate tax liability.

Luckily, Alabama’s tax directly tracks the previous credit system, which no longer exists. As a result, Alabama effectively has no estate or inheritance tax. Alabama residents thus have only the federal estate tax to worry about. High net-worth individuals should obtain legal consultation to discuss ways to reduce estate tax to stay within the new higher exemption.

Even non-high-net-worth Alabama residents should, however, be wary if they inherit property from other states that do have inheritance taxes–Iowa, Kentucky, Maryland, New Jersey, Nebraska, and Pennsylvania.  Inheritance taxes are levied against the recipients of inherited property after property is distributed, rather than against the decedent’s estate before property is doled out, so Alabama residents who inherit property from those states may owe taxes to those states.

If you have questions about planning your estate in Alabama, contact the experienced and professional Guntersville estate planning attorneys at the The Hawkins Law Firm for a consultation, at 256-502-4444.