What Parental Rights do Grandparents Have in Alabama? 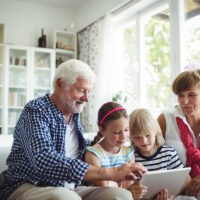 Family dynamics differ across generations, cultures, and even among families within the same community.  In some families, children visit their grandparents on the holidays or other special occasions.  In other families, the grandparents are heavily involved in child-rearing, acting almost as a second set of parents.  But what happens if a parent or parents no longer want the grandparents involved in their children’s lives?  Do grandparents have any rights, such as visitation?  Read on for how Alabama handles grandparent rights, and contact a seasoned Alabama grandparents’ rights and child custody attorney with any questions.

Alabama legislators previously sought to strengthen the parental rights of grandparents.  The statute essentially put parents and grandparents on equal footing when it came to determining visitation.  Grandparents could be awarded visitation if a court considered such visitation to be in the best interests of the child.

In 2011, the Supreme Court of Alabama fielded a challenge to the law.  A set of grandparents successfully petitioned to visit their grandchildren over the objection of the parents after the trial court found that visitation would be in the best interests of the children.  The parents argued that they had the constitutional right to raise their child as they saw fit, absent a compelling reason to the contrary (such as child endangerment).  If they did not want the grandparents to be involved in their kids’ lives, they had the right to declare so.

The Alabama Supreme Court agreed, finding that overriding the parents’ desire to keep the grandparents from winning visitation would require more than a simple “best interests” evaluation.  There must be a presumption in favor of following the parents’ wishes, and they should only be overridden where necessary to protect the children from harm.

Grandparents Can Still Petition for Visitation

The standard for granting grandparents’ visitation over the objection of the parents is much higher than the “best interests” standard.  There is a rebuttable presumption that a “fit” parent’s decision to deny grandparent visitation is in the best interests of the child.  The grandparent must satisfy a “harm” standard, which entails showing that the child’s emotional, mental, or physical well-being would suffer if the grandparent is denied visitation.