My Spouse Won’t Sign the Papers: Contested Divorce in Alabama 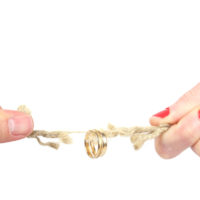 It’s a common theme on TV and in Hollywood movies: “My husband/wife won’t sign the papers, so I can’t finalize the divorce!” In reality, you don’t need your spouse’s consent to file for divorce, although it does make the process easier. Alabama has a procedure in place for divorces where the parties can’t agree on the specifics, including division of property, custody, and whether to divorce at all. Read on to learn about the process of a contested divorce in Alabama, and contact a qualified and knowledgeable Alabama divorce attorney with any additional questions about a pending or potential divorce.

Filing for a contested divorce

To put the myth to bed, both spouses do not have to agree for a divorce to go through. However, if one party refuses to divorce, or the parties can’t agree on details such as property distribution and custody, litigation divorce proceedings must be initiated. A party must file a complaint and serve it on his/her spouse (ideally, with the help of a lawyer), requesting the divorce be granted and also other relief such as alimony and child custody.

Grounds for divorce in Alabama

The complaint must include the grounds for divorce. In Alabama, there are twelve statutory grounds, including adultery, voluntary abandonment, violence, and drug addiction, among others. A complaint may also simply list “irretrievable breakdown of the marriage,” which must be agreed upon by a court.

The other spouse must file an “answer” to the complaint, responding to the allegations, and can file counterclaims. From that point, the parties will proceed with discovery of evidence and various motions affecting the court procedure. If the parties are unable to arrive at a settlement, eventually the court will hold a hearing in which the parties and other witnesses can testify. The court will then enter a final decree resolving all of the disputed issues. Parties generally have around six weeks to appeal the court’s decree.

Many modern divorce proceedings are handled through arbitration, rather than court proceedings, which tend to be cheaper, faster, and simpler. The parties must, however, agree to arbitration and cannot be forced into this process.

Annulments are different from divorces in that they treat the parties as if they were never married in the first place. This can affect issues such as property distribution. Annulments are granted only if the marriage should not have been allowed in the first place for one of a limited number of reasons. In Alabama, these grounds are: one party agreed to the marriage due to fraud or duress; one party was under 14 years old; one party was intoxicated during the ceremony; bigamy; inability to consummate due to impotency; or the marriage was between close family members.

If you or your spouse have filed or are considering filing for divorce, contact the skilled and compassionate Guntersville family law attorneys at the The Hawkins Law Firm for a consultation, at 256-502-4444.