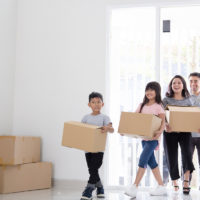 Divorces are hard on everyone involved. Divorces can be particularly difficult for shared children who have to deal not only with the change in emotions and relationship between the parents, but also have to deal with new and often complicated living situations. Many ex-spouses enter shared custody arrangements, which means the kids will have to adjust to living in two different homes. A dedicated and compassionate Alabama child custody attorney can help you not only deal with the legal effects of a divorce but can also help you ease your children through the process. Below you will find a few tips to make the moving process easier on your children.

If You Can Do so Amicably, Continue to Live Together Until a Custody Arrangement Is Finalized

Both for the sake of the children and in order to ensure that both parents retain their custody and/or visitation rights, it can be helpful to remain living together for some period after filing for divorce. Remaining living together after announcing plans to divorce can give you additional time to ease your children into the new circumstances, rather than having one parent abruptly move out before or immediately after telling your children about the divorce. From a custody perspective, it is also helpful for the non-custodial parent (or even just the parent who moves from the previous family home) to remain until the custody arrangement is set to avoid losing any parental rights.

If the relationship is particularly vicious and vitriolic, then continuing to live together for any period of time may not be possible or advisable. If your ex-spouse has been abusive to you or your children, move out immediately and contact the authorities for a protective order.

Explain the Plan to Your Kids

Children generally need consistency, and one of the scariest parts of a divorce is simply not knowing what will happen next. Set a consistent plan if possible, and explain the plan to your kids. If they know what to expect, it will be easier for them to accept the change. Stick to the plan as much as possible so that the kids can eventually come to feel more normal about the situation and remove some of the worry.

Be Civil During the Exchange

When you are exchanging your children with your ex-spouse, it is best to remain as peaceful as possible. Avoiding conflict during the exchange can set the whole mood for the event. The exchange can happen at one party’s home or, if preferable, a neutral public place. If the exchange is happening at a home, it is often easier on the children if the parent with the kids takes them over to the other home; this gives the kids the time to prepare for the transition rather than sitting around at one home waiting for the other parent to arrive.

Try Not to Change Your Parenting Habits

Early after a divorce, it can be tempting to let your kids get away with behavior they normally would be punished for. While this can seem like a good idea, either to make things easier on the kids or to score “points” against your former spouse, it can actually make things more difficult. Set your rules and stick to them, with regard to both rewards and punishment, so that your children can feel like not everything in their lives is suddenly changing.

Make Children Feel at Home at Both Locations

If possible, keep clothing and other personal possessions for your kids at both homes. Limit the amount of packing the children have to do each time they switch places. These items belong to the kids, not the parents. The more they can feel like they have two homes, as opposed to two locations between which they have to constantly move their belongings, the better.