Recording Your Spouse in a Divorce: Alabama Recording Laws 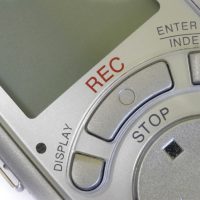 There’s a common image in pop culture and media where one person uses their phone or some other device to secretly record a conversation with someone else they hope to catch saying something damaging. In anticipation of or during a divorce, it can be tempting to record conversations with your soon-to-be-ex. Especially if they are abusive, they admit to lying in court, or they admit other facts that would be harmful to their side of their case, it sure would be useful to play their own voice incriminating themselves in court. There’s another prevailing belief, however, that secretly recording someone without their knowledge is illegal or at least unusable in court. The rules about recording someone without their knowledge differ by state. If you want to catch your ex saying something damaging in order to support your case, it’s important that you understand the laws and the court rules concerning such recordings. Continue reading for a discussion of Alabama’s recording laws, and call a seasoned Alabama divorce and child custody attorney for help with your family law matter.

Recording a Conversation: One Party Consent

There are two primary concerns when recording another person without their knowledge or consent: First, are you violating their rights, opening yourself up to civil or even criminal liability? Second, even if you are not violating any legal rights, are your recordings admissible in court? If you can’t use the recorded conversation as evidence, there’s little reason to record, at least from the perspective of your divorce case.

If you are recording a conversation in which you are talking to your ex, then you are one of the parties to the recorded conversation. You have given your consent to the recording and thus satisfied Alabama’s one-party consent requirement. You can record a phone call with your ex, or place a recording device nearby while you talk to them in person.

You would not be able to record a conversation between your ex and another person, such as a suspected extramarital paramour. Alabama law makes it a criminal offense to use any device to record communications made via wire, oral, or electronic means, without at least one party to the conversation agreeing to be recorded.

A legally obtained recording may be admissible in court, depending on the relevance of the recording to the case. It’s important to keep in mind the reason for the recording and how it relates to your case. If you are simply trying to prove that your ex is a jerk, or even that they cheated during the marriage, the recording is likely inadmissible; if you are going through a no-fault divorce, adultery is irrelevant, as is general hostility between the parties. If your ex is abusive, making threats, or admits to lying in court, however, then the recording could have relevance to the case. Talk to your attorney before attempting to record a conversation to ensure that it is both legal and done for the right reasons.

In addition to recording your spouse in a conversation, you may be interested in taking photos or videos of your spouse. You might consider hiring a private investigator or surveilling your ex on your own. The same types of privacy and admissibility considerations come into play when considering surveillance.

If you are part of the conversation, then you should be in compliance with the one-party consent rule. If you are recording your ex separately, such as trying to record them meeting with a paramour to prove an affair, you need to ensure you do not violate their rights to privacy or criminally trespass. Typically, if you are recording the person in a public place (such as a park or hotel lobby), then the person being recorded does not have a reasonable expectation of privacy. Surveillance in a public area is not illegal and might even be admissible, depending on its relevance. You can also have a surveillance camera set up on your premises, recording whatever happens on property that you own. However, be careful not to trespass into a private area, such as the private residence of your ex or their paramour.

Surveillance is a tricky issue, and it’s best to leave it up to your Alabama divorce lawyer to collect evidence for your case in a more straightforward, above-board manner. There are few situations where such evidence is actually helpful; Alabama allows no-fault divorce, so demonstrating wrongful conduct like adultery is generally not beneficial to your case. Talk to your lawyer before engaging in any kind of surveillance or recording of your ex to ensure that you do not create any unnecessary liability or other troubles for yourself or your family, especially if it would not be ultimately useful for your case.