Is Alabama a Common-Law Marriage State? 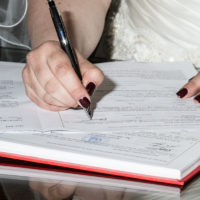 Not all states require couples to follow all of the legal formalities of marriage in order to claim certain benefits of married couples. Many states will recognize a marriage for purposes of tax benefits, child adoption and custody, medical decision-making, etc. if the couple meets certain requirements even without filling out a marriage certificate. Alabama has a more complicated relationship with the concept of common-law marriage, and it has changed in recent years. Read on for an understanding of how Alabama handles common-law marriage in 2019, and contact an experienced Guntersville family law attorney with any questions about an Alabama family law issue or divorce.

Does Alabama Recognize Common-Law Marriage in 2019?

For couples seeking to marry, the message is clear: You must go through the full, legal process to have your marriage recognized. Under current law, the couple must have the marriage “solemnized” by a minister or other qualified person, provide appropriate marriage documents to a probate court, and either receive a marriage license or otherwise have the marriage recorded. Marriage licenses in Alabama are also changing: The Alabama House of Representatives just passed a bill that would end the issuance of marriage licenses by probate judges and instead have them record documents that would serve as the official records of marriage. The bill is currently on the governor’s desk, awaiting his signature or veto.

Despite the new law, any common-law marriages that began prior to January 1, 2017 will continue to be recognized. In order to qualify for a common-law marriage under Alabama law, the man and woman must legally be able to marry, must intend to marry, and must present themselves as married. Legal ability to marry means that there are no legal bars to marriage: Neither party is already married, both parties are of legal age, the parties are not closely related, etc. There are numerous ways the parties could “present themselves as married,” including by filing joint tax returns, signing a lease together, and telling friends and family that they are married. Courts must find the appropriate elements by “clear and convincing evidence,” which is a high evidentiary standard.

If you have an established common-law marriage, it is treated for all legal purposes as a regular marriage. In order to end the relationship, you must get a divorce. If the parties disagree as to whether they were actually married, then a court will look to circumstantial evidence to determine if a common-law marriage did exist. The parties must have clearly agreed at the time that they were, in fact, married.